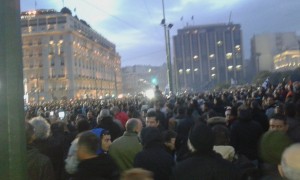 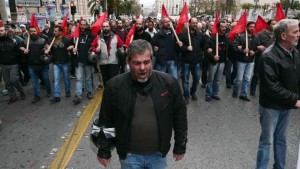 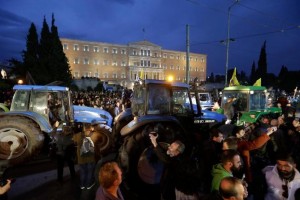 January and February have seen an angry mass campaign of protests, demonstrations and strikes across Greece against the raft of measures proposed by the government to try to meet the WONGA-like demands of the 3rd Bailout European lenders, who require 1.8billion Euros ‘savings’ from pension ‘reforms’. Pensions have already been cut at least 11 times since 2010. The measures include further cuts in pensions, an increase in retirement age to 67, big hikes in monthly social security contributions, tax rises and the removal of fuel tax exemptions for farmers.

On January 8th hundreds of pensioners and workers marched against the proposals.

On January 21st thousands of professionals –lawyers, doctors, engineers  – held a protest in Athens, while seamen held a second day of strikes keeping ferries tied up in port and farmers blockaded roads in Northern Greece. Unions say that a planned increase in pension contributions, combined with tax hikes,will lead many professional groups to handing over 70-85% of their annual income.

‘For farmers, the ‘reforms’ will not only raise social security contributions from 6.5% to 27%, but double income tax payments from 13% to 26%, eradicating more than three quarters of their annual earnings. “There are some I know who are forced to live on pensions of €360 (£275) a month,” says Vergos. He was among hundreds of farmers and stockbreeders who attempted to storm the Greek parliament upon hearing of the proposed plans in November. “It is as if with these latest measures they want us to give up.”  (Guardian)

On February 4th ‘the strongest general strike yet’, supported by all the main public sector and private sector trade unions, brought tens of thousands onto the streets across Greece with demonstrations of 50,000 in Athens, 16,000 in Thessaloniki and in other towns and cities. The BBC reported:

‘Schools stayed closed, some hospitals were reduced to emergency services and public transport only functioned to bring people to and from protest actions. Farmers have threatened to make the paralysis permanent with road blocks across motorways and border crossings, if the Syriza government does not scrap its pension reform programme. Ferries remained in harbour.‘

This was followed by two days of protest February 12th and 13th when thousands of farmers set up a protest camp in central Athens and trade unionists joined farmers in a mass demonstration.

The Guardian reported ‘Farmers wielding shepherds’ staffs have clashed with riot police in central Athens as thousands headed to the Greek capital for a two-day protest against the government’s plans to impose tax rises and pension system reforms.’

‘About 800 farmers from the island of Crete rallied outside the ministry of agriculture, throwing tomatoes as tension escalated when police prevented them from staging a symbolic occupation of the building. Clashes soon broke out, with riot police using teargas to repel protesters, who were throwing rocks and setting bins on fire.’

‘At one point, an outnumbered riot police unit was forced to flee up a street with Cretan farmers in pursuit.’

‘Many of the ministry’s windows were broken, while rubble from rocks and broken paving stones lay strewn outside the building. Police said the farmers also threatened to spray riot police with a pesticide used for olive trees if officers used teargas. At least four farmers were detained.’

The thousands opposed to these new austerity measures are told by the Greek government that the pension system is unsustainable and on the verge of collapse. And the European lenders and the IMF demand that pension ‘reform’ is an essential condition of the 3rd bailout and a pre-condition for the start of any discussions of debt relief for Greece, overwhelmed by an ever growing mountain of debt.

So why is the pension system in such a bad way? Why are the Greek people so opposed to further pension cuts and hikes in contributions and taxes.  It is nothing to do with the myth of the ‘lazy’ Greeks pedalled by the media , but much more to do with the terrible results of 6 years of destructive austerity imposed by the Troika ( European Commission, European Central Bank and the IMF) which have pared life in Greece to the very bone, and destroyed the financial basis of the pension system:

Greece’s debt and its spending on pensions are often quoted as percentages against Greek GDP by EU and IMF economist and politicians. It is the irrational madness of the austerity programme – allegedly intended to make the Greek economy sustainable -which has shrunk  GDP drastically and has thus made the debt and pensions even more unsustainable  As Reuters reported in January  ‘Greece’s mountain of debt is expected to reach 187.8% of annual GDP this year’

As Yannis Mouzakis of MacroPolis commented : ‘The paradox in Greece’s current efforts to reform its pension system is that the troika-sponsored programmes that were devised with the purpose of restoring fiscal health have exposed all of the system’s weaknesses and severely affected its sustainability.’

‘The social safety net has been whipped away at the time it is needed most and health care spending has been reigned in to the point that the quality of treatment is suffering.’

The Syriza Party was elected to government in January 2015 and then again in September 2015 on an anti-austerity platform. The current government is tied by the conditions of the 3rd Bailout Memorandum, but they have implemented some measures to alleviate the humanitarian crisis. The government introduced, as its first law, a law against the humanitarian crisis which was passed with a unanimous all party vote in March 2015. It provides food for 150,000 households via a pre-paid Solidarity Card, subsidises the monthly rent for 30,575 households and provides free electricity for 90,000 households. A health security card for all those who lost their health insurance when they lost their job provides for medical examinations and a free travel card has been provided for long term unemployed.

The government are also working with the social solidarity movement which has established a wide network of solidarity clinics, pharmacies, without middlemen markets, food banks and kitchens, solidarity psychiatric support, community cooperatives and other solidarity structures.